Moving moving and moving, and then there is the little bit of trying to make some money thrown in. As I was writing the previous post (weeks ago) Fran walked into the room and informed me that we could do a 5 day show a the UPenn archeology / anthropology museum. I said "Okay" and we immediately began running around like maniacs to get stuff together. What made the entire show really interesting(ironic) was that,
1. We were doing it at the last minute, and there would be a gala preview party, a "hard hat" preview party, and the show hours were 11-8 Fri-Sun..
2.We had to have our entire inventory out of the Connecticut shop, with no where to put it except the house.
3. Our plumbing at the house was backing up and the Sewer repairs guys were there ripping out the basement floor and digging out the front yard.
4. The chimney repair crew was at the house to restore the fireplace to it's original working condition.

So, what happened?
The show went well, we sold a few things and I even sold one of the knitted recipes I had done. The Parties had fabulous catered food and drinks and we hobnobbed with the Philly elite(well, the Main Liners anyway).
Fran made it to Connecticut and in the process changed his name back to Francis, We managed to unpack the van after the show hours and it sort of fits into the house.
The plumbers were great and it ended up that things weren't as bad as we had feared and the bill (while still a lot) was thousands of dollars less than we thought it would be.

and..... the fireplace, It's weeks later the guys are still here. 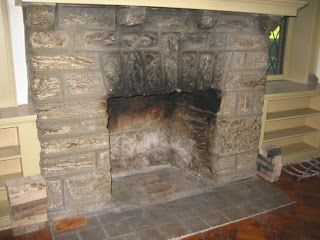 They have promised that it will all be finished today and ready to go. It seems they had ordered the wrong length of liner, forgot to order a top, oh, forgot to put in the damper, had to order a new cap since the first one ordered was the wrong one. We'll soon know if we have a working fireplace.

There has been some other stuff ... the new studio 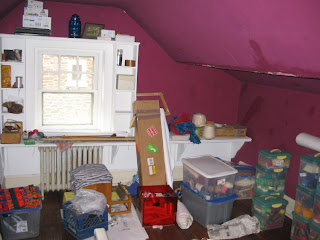 Yes, it is purple, no I haven't unpacked things. The loom won't fit. It's an attic with sloped ceilings, I'm working on it.

I've done a teeny little bit of knitting. one hat and the start of a second. (I also bought a little bit of sock yarn) which I've hidden since I've told Francis I'm getting rid of most of the stash. 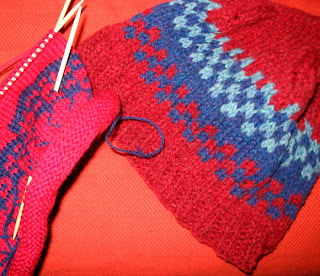 I love the colors of your hats! I don't email everyone back, though I probably should. You don't have to email me - but I love your knittin!