There hasn't been another seizure. The Vet did blood tests and then went away on vacation, so I haven't heard from him. He is suppose to be back tomorrow and call me.
So until then we're assuming that it is a form of epilepsy of unknown origin. Since there was only one seizure and it was fairly short it will probably be a OK with out any type of medication, we'll just have to watch him. The Vet did say that it would be unusual if this developed at his age, so if it is epilepsy the people who gave him up most likely knew about it, that's the vet's suspicion at the moment.

We're trying to get enough stuff together so we can sell it and make some money. Funny that the hard part is finding the objects that use to be fairly simple.

I have been doing little bits in the studio, but today , gosh..... I'm feeling deflated. or maybe defeated..... There is a fiber alumni show at Cranbrook. Everyone was asked to submit images etc... for a show at the museum and there's a book project connected with it. anyway - long story short, I wasn't picked for the show, they picked 60 out of the 200 who responded.
Now I'm really wondering if I should continuing trying to make stuff.

I'm not going to whine on about this, but it just feels sucky.

Oh, yea, there was a little knitting going on with some crazy novelty yarn from the dollar store.... not anything except a ?????? 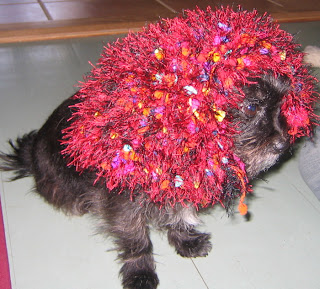 Wow...I was a few posts behind (dont take it personal, because I've read NOBODYS and actually yours is my first stop on the blog express)...but I'm sorry to hear about Chet and hope he's still doing okay.
That would have freaked me out.
XOXO ~b