I have been in the middle of an art meltdown, or freak out or ..... I don't know what to call it. It sort of began when I saw the Radical lace.... show, well really it began when people started contacting me and asking why I wasn't in the show. Yesterday I was asked twice. yikes, then there was the feeling of rejection ......

I'm still plugging away in the studio though.... today's wall, these are some giant knots made out of paper, hmmmm, we'll see where this goes. I also have the loom threaded and have been working on some double-cloth things incorporating newspaper. 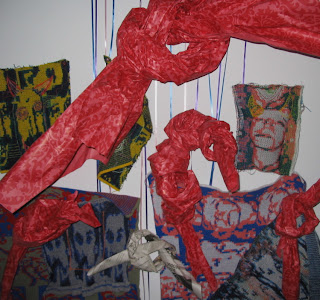 O.K. I feel a little better just getting that out, thanks everyone for your tolerance.

What can I say about Philadelphia? The visit was very short but it was so great to see Melissa. The trip to the Fabric Workshop contributed a bit to the freak out though. I realized that I was an apprentice there in [ahem] 1980. It was great to see Melissa and I thought I would just pass on the good news - both she and Nina have been awarded Canada Council grants, that should make things a little easier for them in the studio work. oh , one last thing about Philly. There is good food in that city. We basically ate constantly for the 24 hours we were visiting.

The Chet update....
The Vet has been doing a series of blood tests. We are trying to get to the bottom of the seizures, anxiety, and aggression. Well, the tests show that he has hypothyroidism. He's on medication now to correct this imbalance and hopefully things will be improving.


We are also busy getting ready for the garden show in Chicago, it's a big deal and a ton of work. We'll be gone for a week and we're hoping to come home with some extra money.

I'm going to admit it.... part of my meltdown has to do with turning 50 in a month, I didn't think I was effected by that kind of thing, but it has me just evaluating and trying to figure out how to get to the place I want to be.

I'll try to get a post in before leaving for the trip but if that doesn't happen, updates will be in the last week of April.
Posted by JohnK at 9:54 AM

I have many close friends that swear to me that fifty is nifty.

Thanks for sharing the art process stuff. I love reading it.