We've been to Chicago and are back. The trip out there was long and the driving was difficult. We had snow to start out. It took 5 hours to drive what would normally be 2 1/2. That was it for the snow though, then the trip was rain. Fran drove and by the end he was wiped out. 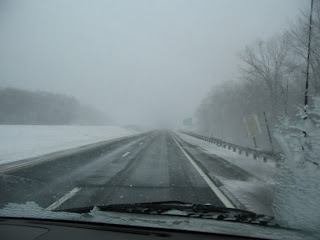 Oddly, we got to Chicago earlier than we expected. That turned out to be a good thing and we unloaded the van the day before show set-up. Lucky for us, since the next day was chaotic , everyone trying to move in garden items and not much room to park. It was a mess....
The show was so so, it feels like it's been months, I've sort of forgotten about it......

The best thing about being in Chicago was getting to see my friend Lucy and visiting her studio (at midnight on a long show day but I'm not whining). Check out her work. I love it. Here is an example of another person who was overlooked for the Radical Lace... blah blah blah show.


Fast forward to us driving home... no problems and the weather was great. Remember that snow from the day we left?, well when we got home it was in the high 80's and everything was in bloom 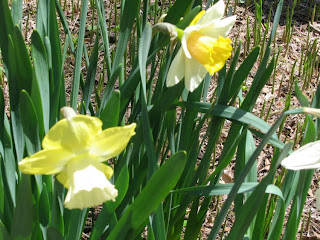 I've been back for a week, and we have been spending a lot of time running to the shops and getting the booths looking good. We really need to be making some money.

I've managed to work a little bit. I tried doing these woven things on a little frame loom. Good for the road trips. The idea is to add some growing plant material to this. I don't know, we'll see what happens. It's very in the percolating not articulated stage right now. So as a distraction I've been 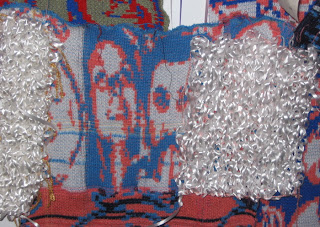 Straightening up the studio. Chet's been there helping. (here he is pointing out a knitting machine and hinting that maybe 5 are just a little too many. I , of course, assure him that I need the extras for parts) 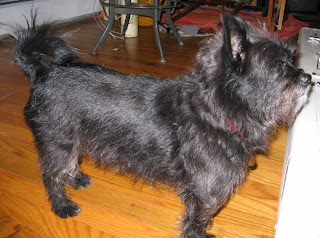 Chet is getting better. The thyroid supplements help with his appetite and attitude. He's still a Terrier - loves to growl.

And that concludes this little update..... I have a feeling that I've lost many readers and say thanks to everyone who has stuck around.
Posted by JohnK at 12:33 PM

Glag Chet is doing better. And I'm here, too.

Still here. Bloglines is great for that. No need to keep endlessly checking.

I'm still here, too...a little behind because of the computer problems, but that's fixed now.

So. When is Chet's dog hair making it's way into your knitting projects? I have this idea of you weaving in some of his fuzz as various different beards on your knitted faces. Heeheee!!