I have spent the last three days moving the studio. 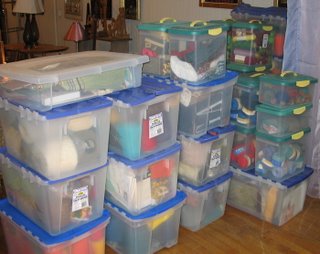 I took a photo of a few of the boxes. In total there were 32 of the large plastic crates.
Mostly yarns. 4, or so, boxes of books and some filled with equipment ( one was knitting needles). So that meant there were 20 boxes of yarns and then the small boxes, 12 of those - all cottons. Bonnie said it, and it might be true .... I'm a yarn ho.

The only mishap occurred when I lifted a file cabinet and the top drawer whacked me in the temple. I still have a lump, but I have avoided a black eye.
Right now all of those boxes are in the new studio at the house and I'm trying to get everything put into some kind of order. Once the stuff is shelved I'll move in the table and the loom and set up the machines. I'm thinking of not setting the bulky machine up until I need it. They take up much more space set up then when they're packed up in the cases.

Next week I'll be in Toronto finishing up the collaboration and installing the piece. Oh. I also had a request for slides from someone who is doing a book on "art knitting". hmmm..... I'm thinking about that one.

Now it's back to the shop and moving this stuff in the sale. (fingers crossed)
Posted by JohnK at 10:03 AM

And you've accomplished one other task as part of this move. You've made some of us not feel so bad about the size of our stashes ;-)

I had another 16 skeins arrive today. Can anyone explain this?