The pizzelle are finished. I was laughing to myself about the "recipe" that I use. It's a list of ingredients written on a postcard covered in a few years of sticky dough. I can hardly read it, if anyone is feeling adventurous. 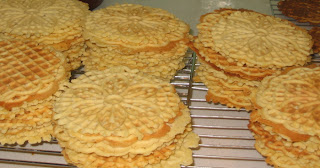 So that's what I had to work with.
I do know that I got the recipe over the telephone from my sister. We always called the pizzelle made this way, with the confectioner's sugar, Joe and Terry's recipe. That would mean we have probably had the recipe for over 30 years. Terry died sometime in the 1970's. That's something I love about cooking and food. It is a part of that line between the past and the present, I always think of Terry when I make these even though my memory of her is very faded.

I mix together the eggs and the sugar and the melted butter(cooled), then I add the flavorings and the anise seed. I always add an extra tsp of the seeds. I mix that all together and then add the flour. This year I needed to add the extra 1/2 cup I think the eggs were extra large.

Anyway it's that simple. What you end up with is a very soft dough. 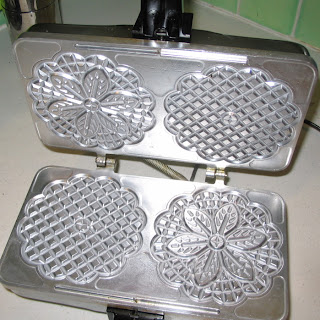 you put a teaspoon of the dough for each cookie and press for about 30 seconds. They cool really fast and when they're all cooled I sprinkle them with powdered sugar.
That's the pizzelle story. Oh and yeah it was about 6 dozen.
Posted by JohnK at 3:05 PM

wow, those look great. Too bad a press is needed.

I am so jealous. Girl wants pizelle maker :-(
But now armed with a good recipe, I might just need to buy myself (another) holiday gift.