View from the deck

Our friends, Suki and Timm, are mushroom foragers. They have been telling us that this year would be a great mushroom year because of all the rain.
Yesterday Suki appeared at our doorstep with two types of boletes and yummy, yippee, hooray CHANTERELLES. So for dinner last night we sat on the deck and enjoyed the chanterelles sauteed with shallots and parsley on udon. 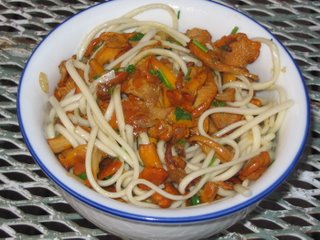 The deck in the summer is our favorite room. We watch the wildlife go by. I have mentioned the bear in a previous post. We have also watched a family of red squirrels, we counted six, running and jumping through the tree to get to our cherries. The birds have been bringing their young around too. A father cardinal has three little ones following him through the yard as he grabs bugs and feeds them, so cute. And there is a wren family (noisy) and sparrows and robins and blue jays. Our deer, we call them our deer because we recognize them from year to year, have been bringing the fawns through. One has a singlet and the other has twins. The deer are the reason that we don't plant a vegetable garden anymore. Fun to watch. The cutest ever was last year when a fawn was sniffing at a baby rabbit, I'm not kidding, just like Bambi and Thumper.
One little note about the mushrooms, Suki called us later in the day and relayed the information from Timm that we shouldn't eat the large boletes because they were bitter, not poisonous, they just didn't taste good. That has made us a little leery of eating the smaller boletes too. They are still sitting on the counter while we decide.
Posted by JohnK at 9:56 AM