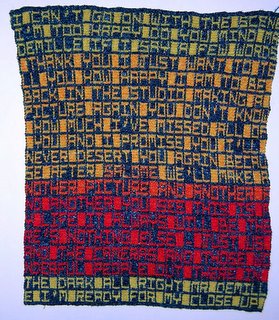 Last night during dinner we began talking about movies and guess what, Sunset Boulevard came up in conversation. I think it always does when we're talking about films. I thought hey, I should post some images of the earlier work I've done that isn't on the knitting machine, The first one is this final scene from sunset boulevard.

So what were we eating. It was a typical friday night dinner of Maryland style crab cakes, roasted potatoes and since it's winter, brussel sprouts. My normal way of making the crab cakes includes using about 2 slices of torn up white bread in the mix. We didn't have any white bread in the house so I substituted bread crumbs and it worked. Oh, I also made a mistake by grabbing cilantro out of the fridge instead of the flat leaf parsley, we thought why not so I used that and held back on the secret ingredient, nutmeg. I added some Old Bay and a couple of tablespoons of mayonnaise to hold them together and then broiled them after putting a little pat of butter on top, They worked out really well. I have one with me today for lunch.
Some people call them planned overs. I just say it's a good lunch.
Posted by JohnK at 10:09 AM